To understand how the commit-reveal commitment scheme works, it is useful to break it down into it's two component parts:

This scheme is particularly useful when conducting a poll or election. One might want to wait for all votes to be cast before revealing who voted for whom. This prevents voters basing their judgements on votes which have already been cast.

To better understand how commit-reveal works in practice, consider the following implementations:

First, let's understand how to implement commit-reveal voting in the physical world. The diagram below goes through each of the steps:

Following these steps ensures that people voting are not influenced by each other's votes during the voting period.

Implementing commit-reveal voting in code is different from in the physical world. The difference is, in code, we will use a hash function instead of a safe.

For this tutorial, you can think of a hash function as a magical pipe which you stick words in, and it spits out crazy HEX (hexadecimal) code that looks like: 9c22ff5f21f0b8b9a3cb658. The HEX code that comes out has a few important properties:

Now that you are a master hasher, let's go over how to implement virtual commit-reveal!

Now that we know the steps to implement commit-reveal voting, let's code it up in Solidity!

Setting up our Commit-Reveal Election contract

We will use the Browser Solidity editor to deploy a contract which handles commit-reveal voting for a single election. Click on the following link to open Browser Solidity with the CommitRevealElection code preloaded:

Note: You can find the full contract source on GitHub Gist here.

You should now see all of the CommitRevealElection contract code in the editor. Something like the following:

Before we start playing around, let's switch our Browser Solidity enviornment to use a local VM. The local VM is useful for testing because transactions are nearly instant & don't require test ETH. Later we can use the public testnet which will let us create votes over the internet with our friends! 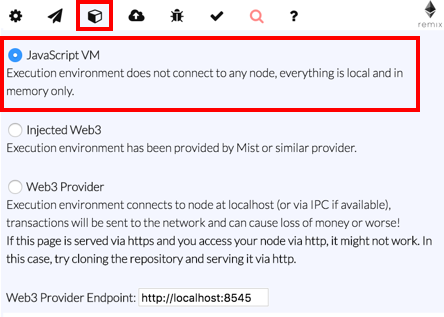 Now that we are using the JavaScript VM, let's start a test election!

To start a new election, we must deploy a new instance of the CommitRevealElection contract. When we deploy we have to specify some key parameters which will define our election. These parameters are defined in the contract constructor:

To actually deploy the contract, input your parameters and click the red Create button on the right side of the screen:

Now that the contract is deployed, you'll see a bunch of blue buttons pop up like

. These represent values you can access at anytime which do not change the blockchain state. You can click them to check on the current status of our election.

If you scroll down, you will also see:

These are our two most important functions. Soon we will use commitVote(bytes32 _voteCommit) to commit a few votes. But first, we will need to generate our commit hashes.

In our virtual commit-reveal voting scheme, we used a hash function to generate our _voteCommit. In this election we will use the hashing function keccak256. Click the following link to visit a website which we will use to hash our votes: 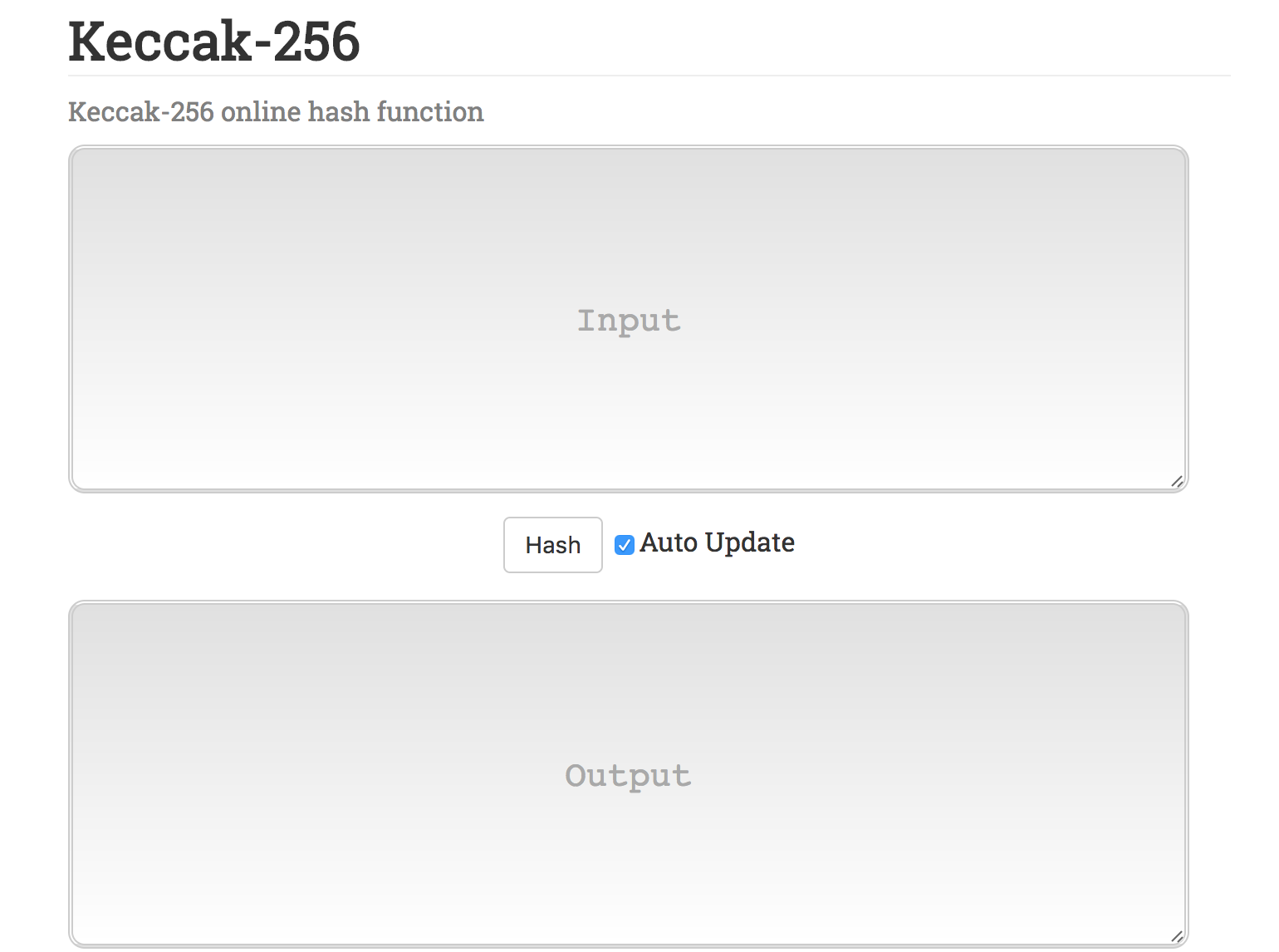 Try typing in the Input box. Notice that each character you type creates a different hash. Also notice, that the same word always generates the same hash. This is how we generate vote commits!

In this implementation, a vote for choice1 will take the form:

and a vote for choice2 will take the form:

Notice that the 1 and 2 are the actual votes. The passwords are included to make sure votes remain secret until the reveal period. Each vote is required to use a unique password. If two votes were to use the same password, then the vote commits will be the same. If the vote commits are the same, then only one vote will be counted!

First we need to generate our vote commit. To do this, input your properly formatted vote in the input section. Then copy the resulting hash. (Make sure you don't forget the password!) 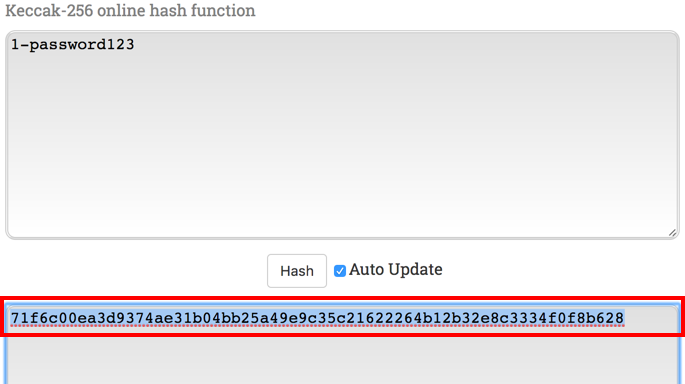 Now open Browser Solidity, where we will submit our vote commit.

Important Note: Browser Solidity requires all HEX to be prefixed with 0x. The hash you copied does not include the 0x prefix. Don't forget to add 0x in front of your hash!

To submit our commit, scroll down to the red commitVote button. Then input your hash prefixed with 0x and surrounded by quotes. Once it is in the right format, click the red button to submit.

After submitting, it is likely that you will receive the error:

This is an extremely common error in Solidity. In this case, it means you submitted your commit after the commit phase. If this is the case, simply redeploy the CommitRevealElection contract!

If your commit was successful, you should receive an event which records that a vote was committed.

To commit more votes, simply repeat this process changing the password each time. In this implementation there are no restrictions on the same account voting multiple times. Just make sure each vote is in the correct format, and that you don't forget the passwords!

Once the voting period is over, we can start revealing the votes! To do so, we will call the function:

The vote is the input text that we put into the hash calculator, and the commit is the corresponding output hash. Don't forget to prefix the hash with 0x. Once it is in the right format, click the red button to submit.

If once again you receive the error VM Exception: invalid JUMP, this is probably because you tried to reveal a vote before the commit phase finished. You'll have to wait until the time is up to start revealing.

If your vote was successfully revealed, you should see a corresponding event. 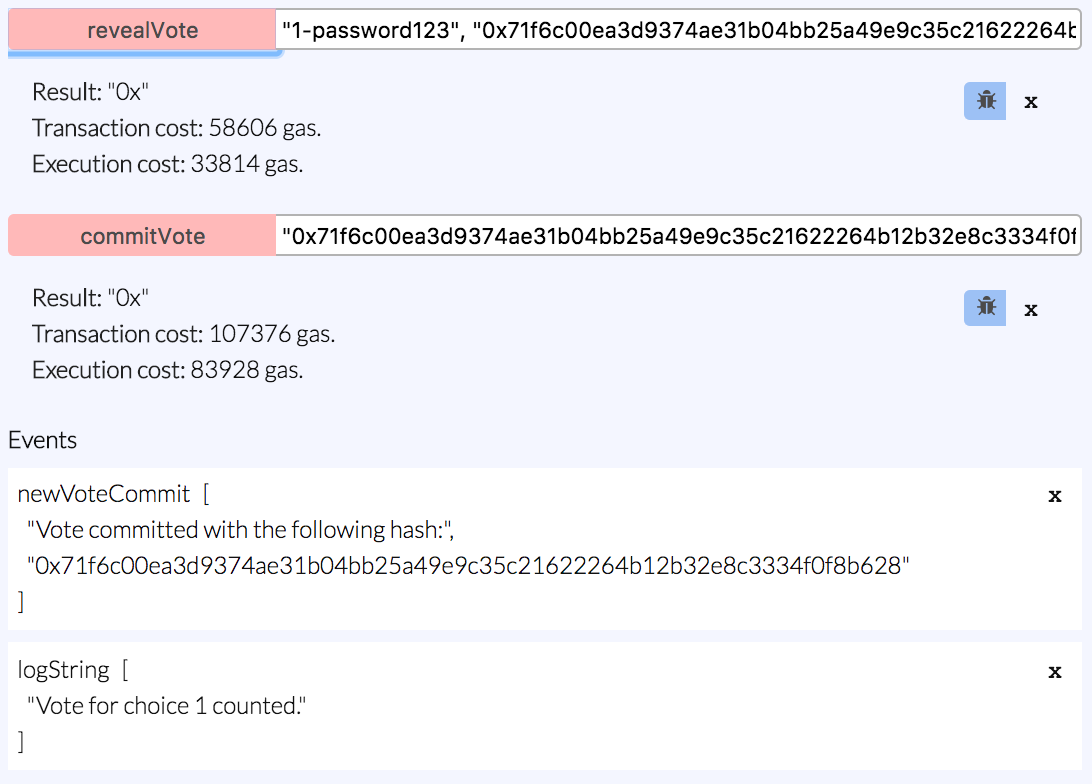 Repeat this process until every vote has been revealed. Note that in this implementation, an election won't finish if there are any outstanding votes which have not been revealed. You can easily change the contract to include a reveal phase timeout if you don't want to rely on counting every vote.

Click on the blue getWinner button when all the votes are counted to see who won!

Of course the winner was Grand Master Doge!

Keep an eye out for the Doge.DAO led by your one, and only, supreme leader!

Deploying to the public TestNet with MetaMask

Note: If you don't know how to use MetaMask, see Learning Solidity Part 1: Contract Dev with MetaMask

First, we need to tell Browser Solidity to use MetaMask's Injected Web3 object instead of the JavaScript VM. Navigate back to the box and this time select Injected Web3.

Now simply follow the same procedure we used for the JavaScript VM. The only difference is you will have to approve all of your transactions in MetaMask, and wait a while for them to be mined.

Using the public network is boring unless you have your friend vote in your election. To do this, first they must open the same Browser Solidity link: 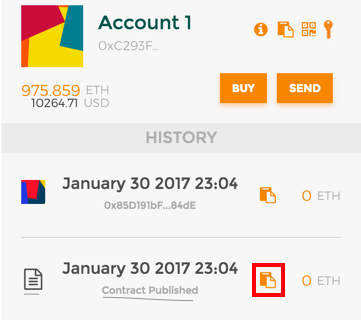 Once you've sent them your address, they will need to add it to Browser Solidity. To do so, click the green button labeled At Address.

A popup will appear asking for the address. Copy the address MetaMask provided into the textfield. Then, remove the 0x found at the beginning of the address! Unfortunately, MetaMask copies the address prepending 0x but Browser Solidity doesn't like 0x in this case. 🤔 [Let me know in the comments if this changes]

Once added, your friend should immediately see all of the same buttons that pop up when you create a new contract. From there, they can just follow the same procedure we used for the JavaScript VM. 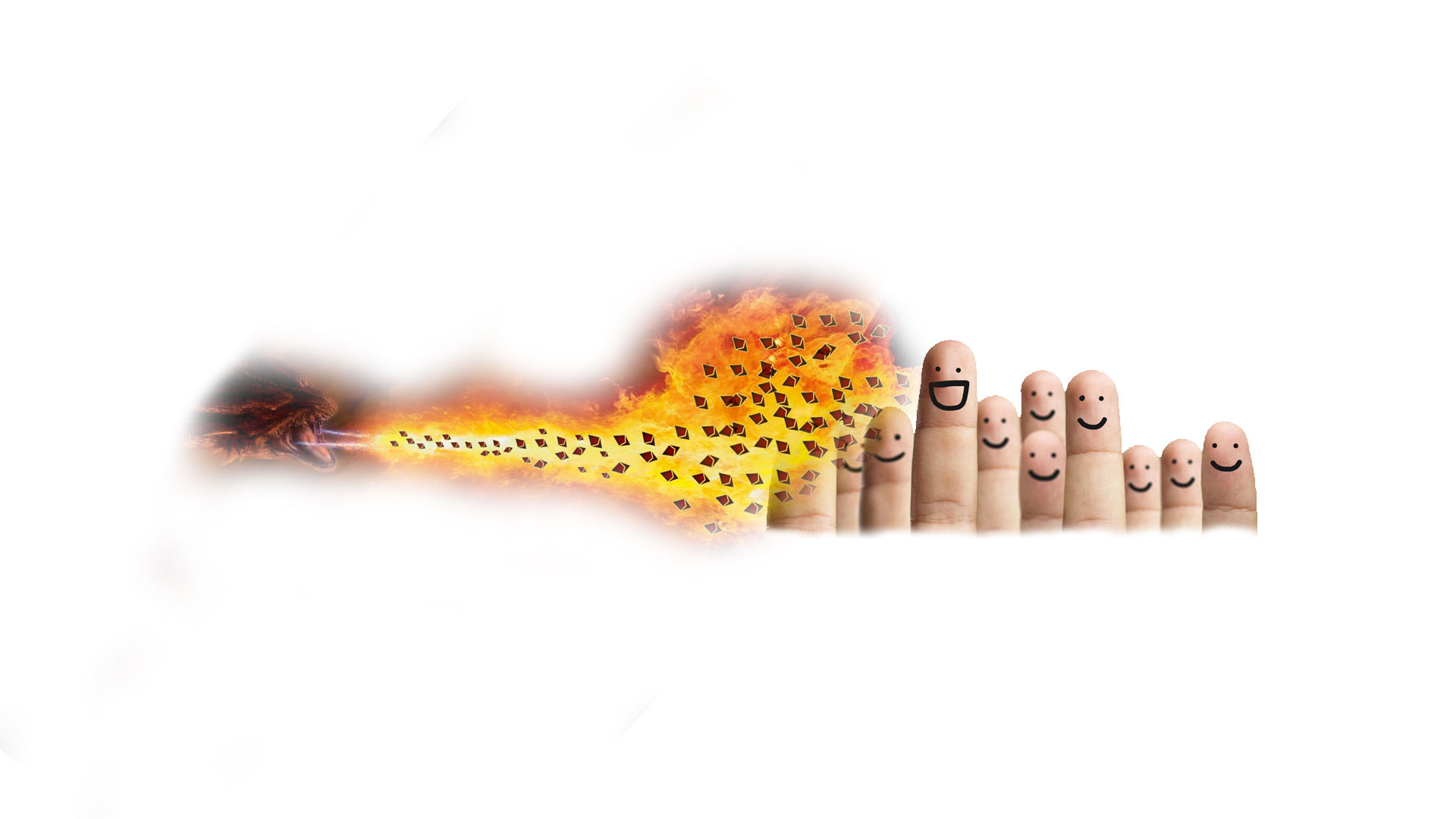 [Cover Image Source] Distributing dividends via smart contracts is difficult with a large number of shareholders. A naive implementation could look something like this: for s in shareholders: dividend = s. 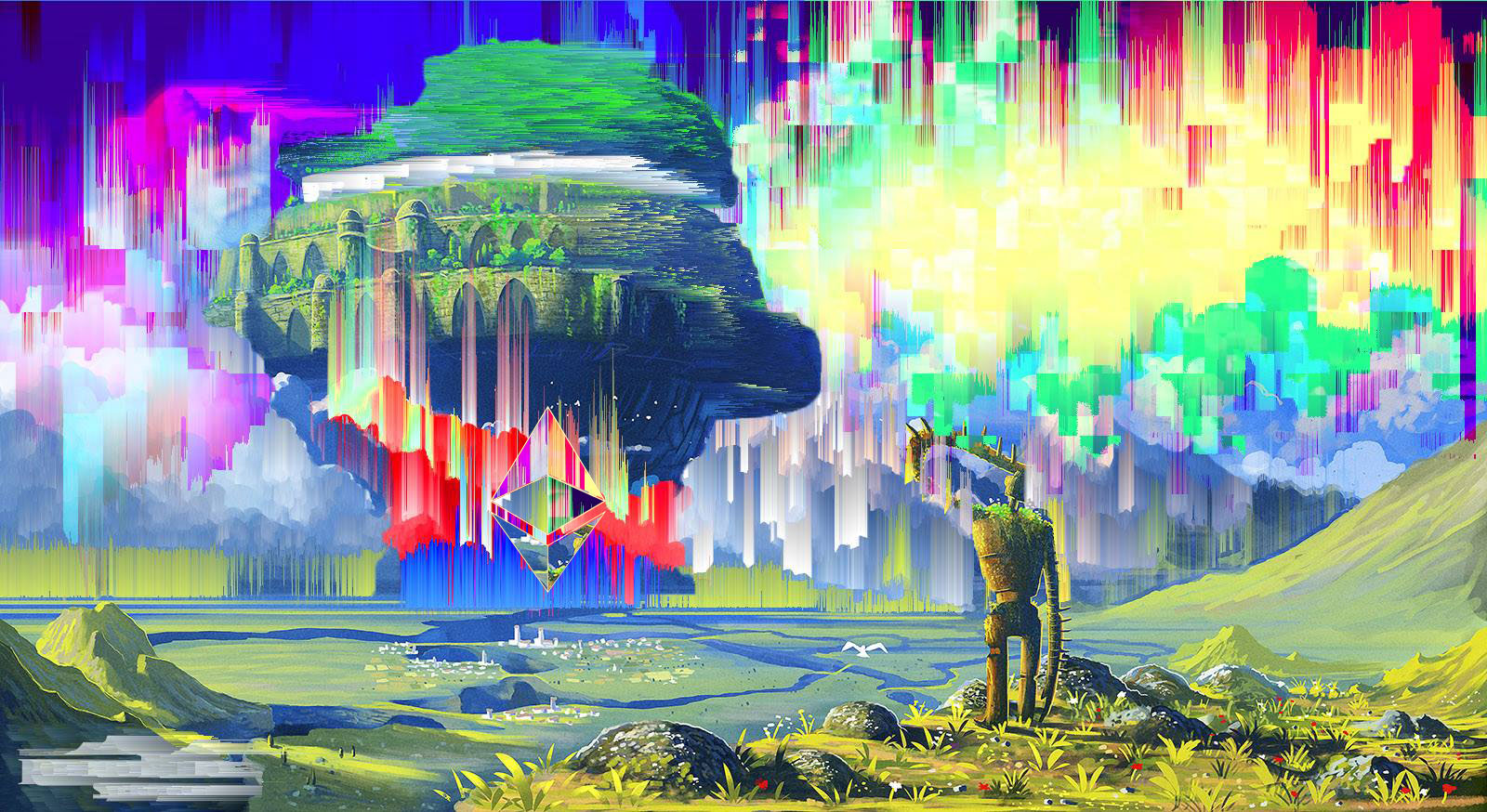 Bitcoin has catchy slogans like digital gold and internet money, but what is Ethereum? Sometimes it’s called the world computer. But what in the world is a "world